the oldest and most popular knight rider site
http://www.knightrideronline.com/forum/ 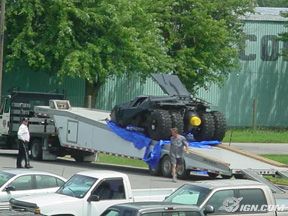 The new Batmobile, which began life as a Wayne Industries military prototype called The Tumbler, is 2.5 tons, 15 feet long, and has a 350-cubic-inch Chevy engine capable of 500 horsepower. It is equipped with front-firing machine guns, a landing hook and, as you can see, 4 rear super swamper tires.

The Caped Crusader's vehicle is also taking a page from Knight Rider's KITT. Batman Begins producer Charles Roven told the NY Daily News that the car can turbo boost. "It has to get up to 220 mph to get airborne, but then it can jump 20, 30, maybe 40 feet," Roven said. To perform this gravity-defying act, the Batmobile utilizes its jet engine and vector controls.


More here: http://filmforce.ign.com/batman/article ... 521p1.html
by KRAvengerII
I'm glad Kitt's getting his props, but i swear, that car is ugly. (Swamper tires?)
by TurbomanKnight
That can do some serious off roading!
by aussieknight
Or at least look like it!

by FuzzieDice
That's the one think I never liked, was when they'd take a well-known car, alter it's appearance so it looks nothing at all like what people have come to know it to look like, and still call it the same thing. KIFT is another example. I mean, I never would expect the Batmobile to look quite like that. I can't say I care for the body style as a Batmobile. Though I would expect this to be instead something out of an old Mad Max movie (I loved Mad Max a lot too, btw).

Because of it's "turbo boost" they are claiming it to have (would that be real technology or will they do stunt/camera tricks for the effect?) and it's front-end appearence, I coudn't help but to think maybe a better name for the car would be "The Fly".

by R.J.1984
I myself don't like the new Batmobile at all. where did they come up with the idea to make it look so pathetic? I don't know if I will be watching the new movie - but you never know.
by sarfraz
Going to be controversial, I love the new batmobile. Its alot more basic giving emphasis to the beginning of Batman's career. Also, it should be noted that the batmobile has been an ever evolving vehicle. The animated series itself had two designs and another one for the Batman beyond series. The movies and comics also show various design aspects to the batmobile. One of the last batmobiles from the comic books looks like an overgrown tank and looks very similar to this movies design. So for a bat-fan (sounds like I'm one) this particular design isn't alien and is understandable.

Sarfraz
by Skav
Got a feeling that the turbo boost scenes will be CGI because it must be expensive building that thing more than once.

Skav
by krfan1
I am quite anxious for the new Batman movie to come out. I hope it's awesome since Batman & Robin stunk!!

Christian Bale is playing Batman. He's a good choice. If anyone wants to see him, watch Equilibrium. Good movie.

Happy to see Kitt getting his credit where it's due....oh, hey jup get the comabt simulator out to pit the new Batmobile against KITT turbo boosting at each other

Nick
by comets78
wish they would have made a better design on for the batmobile it lookls like the car as gas or something but props to kitt vs the bat any day
by neps
I thought I remembered reading that this movie is based on Frank Miller's Year One story line, which is a retelling of Batman's first adventure. The Batmobile is styled after the one in the comic as well, where the Vehicle began as a Wayne Industries prototype.

Sorry, I couldn't resist that one.

neps wrote:I thought I remembered reading that this movie is based on Frank Miller's Year One story line, which is a retelling of Batman's first adventure. The Batmobile is styled after the one in the comic as well, where the Vehicle began as a Wayne Industries prototype.

..probably from yours truly! I've been keeping tabs on this film and eagerly awaiting a Batman film to erase the disasters of the last few films. If you are a Batman fan, I would recommend you pick up year one. I haven't got an extensive library of Batman comics (although its now upto about $200 worth of hard/paperbacks) so can't really comment on the vehicle being a Wayne Industries prototype, but it seems logical.

I just saw a young Bale (around 12-15) in a speilberg film (based in world war 2?) and his acting skills were amazing. Ditto for American Physho. Couple that with the comic hertiage of Frank Millers work and the host of supporting cast, and I'm seriously looking forward to this film.

Sorry, I couldn't resist that one.

by kitt34
This New Batmobile is Truly Horrible
it looks like an ugly army battletank.
by SG-1
i think it is the most revolting thing i have seen with an engine, i mean what makes it worse is how sleak the other bat cars looked, but has this been hit with an ulgy stick or what. And besides if the film is set in batman's past we know he can't lose as we see him in his future in the other films. I think they will murder a what used to be in the first two films a promising franchise, but from where the last one left off it was redeamable, but if this fails or succeeds we will not see the older batman, because if fails they won't want to risk another one but if it is a blockbuster, they will not want to go to the old unpopular style, i think they should just give the film to tim burton director of the first two and give the title role to a older actor.
by R.J.1984
It looks too much like a tank instead of the Batmobile. Sometimes change is good - but NOT this time.