I thought I would share with you a funny thing I came across while watching the movie Tron in preperation for its sequel Tron: Legacy coming out later this year. 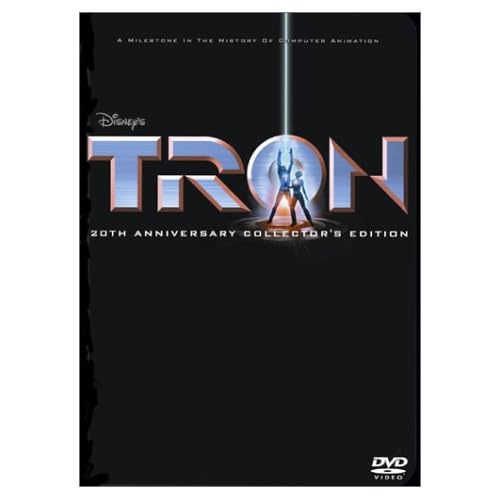 As I was watching the movie which was groundbreaking for its time, I noticed right away as Sark's flagship hovered towards Flynn, Tron and Yori on the Solar Sailor that it featured a very familiar sound effect that is absolutely unmistakable...

Unfortunately I cannot find a video clip online to show you the footage but if you have the Tron: 20th Anniversary edition dvd from Disney released in 2002, I have listed the timecode where the sound effect is heard.

All these sounds are heard when Sark's flagship hovers across the screen.

Now here's where it gets really interesting. Knight Rider premiered September 26th, 1982. Tron premiered July 8th, 1982. This means Tron came first. Additionally Tron was created by Walt Disney Studios which had no involvement with Universal on the movie. So the grand mystery is, how did Tron end up with the turbo boost sound effect if Knight Rider wasn't created yet?

Having done some research, as I understand it Universal used their existing sound library and created new sounds specifically for Knight Rider involving K.I.T.T.'s turbine engine, passbys, and other various effects by recording the sounds of helicoptor engines and other aircraft equipment to incorporate the idea that K.I.T.T. was designed based on aircraft technology and remixing them.

Did Universal's sound department borrow the unique sound for turbo boost from Disney's sound library? If that's true, how would that work if Universal claims to have created quite a bit of original sound effects exclusive for Knight Rider? You would think that would include turbo boost? The only other possibility is the sound effect was added later for the dvd release but I don't see the need for that on the part of Disney. I wonder which studio actually created the sound effect now.

If anyone has any incite into this, I'd love to know more about it.

I will add to the mystery...now, it's been a number of years, but I seem to recall hearing the turbo boost sound effect in the original 1978 Battlestar Galactica! As I recall, it was used when one of the ships was launched.

I am intrigued now as well! Anyone else?

The ship effect is origianl to the film not added in during a later release, much like Prop houses there are sound effect libraries that companies use if they need things. Its likely the effect was created by an effects wizard for use in Battlestar, borrowed for Tron and KR later. I haven't go my sound software loaded at the moment due to losing it in a crash but they may sound similar rather than be indentical.

I have Tron in VHS, haven't watched it recently but if I remember correctly, there were another familiar sound effect used in Goliath when KITT and Michael were playing a card game on the way to Rita's place.
Top

Here's the sfx I mean in the beginning of this video

Joe Huth wrote:I will add to the mystery...now, it's been a number of years, but I seem to recall hearing the turbo boost sound effect in the original 1978 Battlestar Galactica! As I recall, it was used when one of the ships was launched.

I am intrigued now as well! Anyone else?

Good find! Here's a clip I found of the Viper's launching as you mentioned.

The sound effect is quicker and a lower pitch but yeah I guess that proves Disney borrowed from Universal's sound library? After hearing this, I think they had the lower pitched version of the sound from BSG and remixed it for Knight Rider into a higher pitched version that was more than a rush of air being released and more drawn out. The show "turbo boost" has a high to low tone with an echo to it depending on how long the turbo boost lasted on screen.

Still even if that's the case, if Disney somehow got ahold of the sound for Tron which is clearly more in line with what we're used to hearing in Knight Rider, then perhaps Universal remixed their original sound file to match how Disney used it with Sark's ship? Still a facinating mystery if you ask me.

Regarding sound libraries, I don't believe that the customized effects from Universal would be openly shared with other studios without substantial compensation to license them. It is possible though that Disney just bought the license from Universal's sound library to use in their pictures. Maybe there is other sci-fi like Disney movies out there that would substantiate that?

I checked Disney's The Black Hole (1979) but it only seems to have the laser sound effects used in the Sunbow G.I. JOE animated series and generic explosions. I thought perhaps ILM might be the key but no dice as Apogee Productions did the visuals for the original Battlestar Galactica movie (1978) and continuing series. They also did some effects for Star Trek the Motion Picture. ILM took over Trek effects beginning with Star Trek: The Wrath of Kahn.

But we're not lookin for effects, we're looking specifically for sound design. Stan Gordon and Pat Somerset (II) are credited with trading handling Sound duties throughout all four seasons of the series. Pat worked on The Incredible Hulk Series(1979-1980) for Universal on two episodes.

Amazing how far back things can go when you try to solve a mystery as simplistic as the creation of a sound effect that we all recognize when we hear it. At least we know K.I.T.T.'s scanner effect came directly from the original BSG's cylons.

I think the new movie Tron is futuristic even after almost 20 years, because this movie Tron Legacy has very spectacular special effects, and also AVATAR. This movie reminds me that is like Innerspace and Young Sherlock Holmes...more or less.

Im curious as to what the other connections are to BSG,Ive been watching that new Caprica series which is the prequel to the newest BSG and I see Mr Larson is a producer on it,so far its pretty good series

"See ladies,what happens in Vegas,stays in...KITT"
"Fate rarely calls upon us at a moment of our choosing"
Top
Locked
8 posts • Page 1 of 1