AZKNIGHT wrote:There were never any Fieros used in the filming of Knight Rider, so tell him nice try, but he's full of bs.

Does this one count 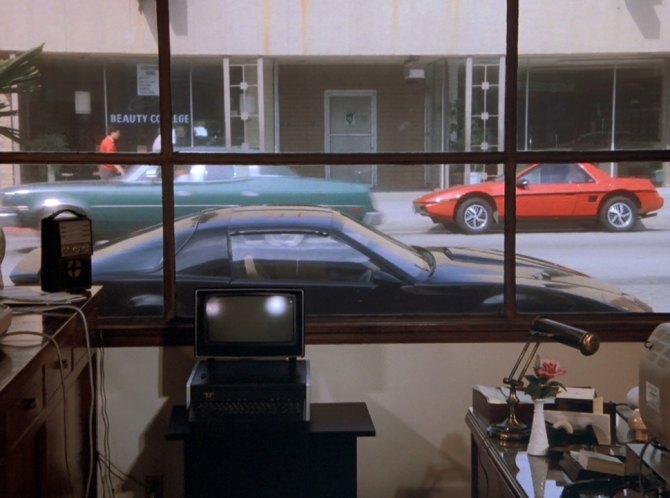 That Fiero "KITT" looks like it has lost a lot of space with that dash. I know that's the case with most Trans Am conversions too, but it's a different design which suits it. That one just looks awkward to drive and the steering wheel sticks out way too far. I'm not surprised, that "K...

I actually own a Fiero GT and I have to say, that one looks ridiculous. The Fiero really is a fantastic car with an interesting history. They started out as commuter cars to begin with which weren't really very exciting, but they were still very innovative for their time and eventually became more o...

You've done a really good job on that. I made one a few years ago too.

lol, I don't know how people have missed it. It has got to be the worst interior view shot of the series! Don't know why they even bothered putting that red light on the dash, What's the point??

Gee you think those are bad goofs! Check out this one from "Out of the Woods" in season 4!

I really enjoyed this episode! The whole thing was exciting to watch and very entertaining! This is the first time I've really enjoyed a new KR episode and I hope they keep up the great work! Only thing strange to me was that a lot of it felt like it was based on "speed". Staying above a c...

Re: Why is there always a ticking clock?

How did the pilot and co-pilot know that KITT's self-destruct was disabled to not bail out of the plane? Were they going to "go down with the ship"? lol, imagine the conversation between the pilots with Mike & Sarah. Pilots: You told us to bail out into the stormy sea!!! And nothing h...

Re: KITT Replica in Greece Being Shown

Those are both great looking replicas!! Greece is very lucky to have them there!!

Re: 10 reasons why this show is going to suck!

Some 5 year old kid isnt going to find all that exciting watch DH as he is now, struggling to be running around in a car that went out of production many years before they were even born But who is the target audience anyway with this show?? It doesn't appear to be aimed at kids with all the violen...

Re: Another new blooper-Killer KITT

dag268 wrote:That was the only problem I had with the DVDs. They cleaned up the footage so much you could see hands, back seat drivers, event the tiny explosives on KTT when he gets shot at.

Imagine what it will be like the day it gets onto Blu-Ray!!

I'd much rather they used a convertible KITT and just dropped the idea of using an F150. It puts me off that they have a billion ads for Ford during the breaks, but in the show its even worse!

Gee someone put some real effort into that photoshop. Almost looks like its the same car!

Re: 10 reasons why this show is going to suck!

Agreed, Though I sort of see why they wouldn't use William for the voice. They're just not finding the right person to voice the new KITT. Seams like there's a lot of changes that need to be done with this series. The original Knight Rider hardly changed at all from the pilot episode. If anything it...

Re: Code of Vengeance Video

I added one more video from "COV" - it's a scene where a guy is watching "KITT vs KARR" on the TV! I guess it was an "in-joke"... http://youtube.com/watch?v=tCKRCaFC16c Joe lol, almost killed the intensity of the scene! It really makes no sense because they all should ...

Re: What I would do with the Mustang KITT

That's absolutely brilliant! Exactly what should have been done. I am just thinking if anything extra could be done to improve the center area of the nose. It looks like a space for something to be added to make it look even better!

I am very sure that never happened. Actually more like 100% sure!

Re: Video of KITT at Auto Show!

That new KITT is really looking great to me. The scanner seams to fit in nicely. I wasn't happy with the dual scanners but I like it more each time, just like when I first saw KITT as a mustang.

Someone go park the BETTER KITT next to it!!

That KNIGHT TWO THOUSAND lettering doesn't look right to me, its the wrong font I believe. Also I prefer the knight symbol when its not a horn button. I am glad they are using the 2TV dash because I like it better than the 3/4 but I do believe it should have continued on using the 3/4 dash. I don't ...

Re: Will KITT still sound like a RAM JET or a normal car ?

Yeah the new KITT should get a Knight Industries Turbojet!! I hope! Don't know why it wouldn't have one.

Re: Why does Knight Rider get so many chances?

[b]It has to be the interest of the viewers for the most part. How many web sites have fans that have a continued interest in any TV show? Also look at how many KITTs have been built. Knight Rider gave us what we loved to see and still crave to have more of. Action High Tech Fast and sporty car Fig...

Victor, The way you are making this new Knight Rider movie sounds perfect at the moment. Everything you say there you are right. The whole remote control thing has nothing to do with KITT in the show, just the effects. The Mustang really hasn't been changed which is actually what I thought is that i...

820USD seams a bit much to talk to KITT on your watch... its pretty cool though. I see it was designed in Australia too!
Search found 876 matches